Interview: Marcos Raiser do Ó from Stripe on the future of the Internet economy

“The online economy has still not fully taken off,” says Marcos Raiser do Ó, Head of DACH & CEE at Stripe. In this interview, he explains what needs to be done to achieve a more networked Internet economy in Europe.

#1 Stripe recently published a study on the internationalization of the European digital economy. What did it reveal?

The main takeaway was that we still have a long way to go when it comes to a European digital single market. Although the Internet theoretically makes borderless trade possible and the EU is pursuing precisely that aim with its “Digital Single Market” strategy, the complexity and inconsistency of regulations in the different EU countries are hindering companies. Only a third of all companies are even sure that they meet all the regulatory requirements everywhere in the EU. Two thirds of companies would sell in ten or more EU countries if it were possible to comply with all relevant local regulations without a significant amount of additional expense and effort. That would allow the European online economy to grow by more than 100 billion euros in the e-commerce sector alone.

We need help from both politics and technology firms here: on the one hand, the legal and fiscal framework conditions within the EU need to be further harmonized, and on the other hand, technology can also contribute to reducing the complexity of regulations for companies. At Stripe, we don’t just see ourselves as a payment service provider, but also want to help our customers overcome such regulatory challenges. For example, we reworked our API for compliance with the Strong Customer Authentication (SCA) requirement early on in such a way that ensures that the regulations are observed, but exemptions can also be dynamically applied and the conversion losses thus kept to a minimum. And we are working on additional products for making regulations more navigable for companies.

#2 Why is Stripe, as a payment service provider, focusing so intensively on the European digital economy?

We want to accelerate the growth of the online economy and enable companies to be globally active from the very start. That’s why we are interested in everything that makes it easier for digital companies to do business and grow. In the last 25 years, the online economy has grown 1,500 times over and seems to be fully developed for most of us. However, it still only accounts for five percent of global economic output. So there is still a lot of room for improvement! The online economy has still not fully taken off, even though some of the most advanced online markets of the world are located in Europe.

#3 And what specifically needs to happen for the growth to be further accelerated?

Our COO Claire Hughes Johnson will be delivering a keynote on this at DMEXCO. The online economy of today is mainly shaped by advertising and is much less versatile than the offline economy. Among other things, that is due to the lack of a payment infrastructure, but also other infrastructural framework conditions. Cloud computing has taken the online economy to a new level – but storage space is just one of many infrastructural aspects.

#4 And where does Stripe see the next infrastructural innovations besides pure cloud computing?

We are seeing an innovative wave in the entire “API as a service” field. Today, it is much cheaper and quicker to start up and scale a company, since various API-based services can be used as building blocks and not everything has to be developed in-house. In the same way as companies have been able to reduce high frictional losses by no longer having to set up and maintain their own server capacities, we are also seeing an enormous productivity gain at companies that no longer have to build their own HR, payroll, expenditure and payment systems.

The new infrastructure massively reduces the costs for starting up and managing a company – and at the same time spawns a whole range of new services and companies in the software-as-a-service field. It is becoming cheaper to build up and manage a company, and new business models – and consequently a more versatile, more networked online economy – are emerging.

#5 Do you have an example of these new business models?

Many publishers and media companies are still extremely dependent on advertising revenue when it comes to their online content, especially here in Germany. We work together with them strategically and, with seamless payment options, help them tap into new online revenue streams and become less dependent on advertising. Axel Springer and Der Tagesspiegel, for example, use Stripe as a payment partner for their paywalls. Der Spiegel, FAZ, and Handelsblatt have also recently started collaborating with us; in the streaming sector, we support Joyn, to name just one company. These and other successful providers highlight the fact that German media consumers are also increasingly willing to pay money for high-quality content as long as the payment process doesn’t put a big hurdle in the way. Such digital subscription models are a decisive factor for the success of an entire industry.

#6 You mentioned a more networked online economy. Does the digital economy thrive on young and small companies?

The rise of many software-as-a-service, platform and marketplace companies of all sizes in recent years is proof that the digital economy is changing. However, big, established companies have also managed to establish such platforms, for example MAN with its logistics platform RIO and Daimler with its mobility platform ShareNow. Small and big companies alike are transforming traditional industries for the online world and, in turn, letting other companies and entrepreneurs be part of and benefit from it.

That is incredibly important, not least also for the creation of new jobs. The transition from an advertising economy to a value-creation economy may not be straightforward, but we believe that it is desperately needed and we also already find ourselves in the middle of this transformation. Only when we look past clicks and visual contacts will we start leveraging the true potential of the online economy.

On a side note, we will be at DMEXCO with our own digital expo booth. Come and stop by! 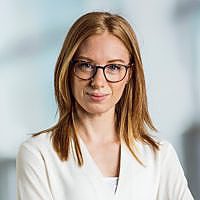 As the project assistant in the marketing team, Hannah supports and advises all customers who benefit from DMEXCO's digital reach. Following her master's degree, she learned about the successful implementation of digital communication measures in the increasingly complex environment of the agency world.

Are sustainability and social responsibility feasible in e-commerce?
Share this story