The 3 most powerful motivational TED Talks

Is your mood at rock bottom or frustration eating you up? These three TED Talks let you in on how to get back your motivation and positivity and turn even setbacks and crises into something good. Let’s get started!

In her TED Talk, psychologist Susan David explores how we deal with our emotional world. All too often, so-called bad emotions are bottled up or pushed aside: “everything will be fine if I just stay positive”. In her TED Talk, “The Gift and Power of Emotional Courage”, she explains why that is a fallacy.

David emphasizes the importance of staying agile, also on an emotional level, in all aspects of life. Suppressing or denying supposedly negative emotions won’t make you feel better. Quite the opposite: you only make them stronger and, at worst, end up resorting to something to numb the pain. For her part, she used food to compensate for her grief and pain after her father’s death from cancer when she was a teenager – until her English teacher encouraged her to write her feelings down in a notebook. That gave her the headspace to come to terms with her otherwise silenced emotions and was nothing short of a revolution for her.

Her message: a broken heart, stress, grief, disappointment, and feelings in general are part of our contract with life. Life is fragile. To avoid getting caught up in rigid ideas that life or you as a person should be a certain way, it is important to be open to messy, difficult emotions, accept them, and see them as a signpost (she calls it data) for something that we care about deeply.

How to become emotionally agile

Her advice: Diversity isn’t just people, it’s also the emotions inside them. Emotional agility enables you to be with your emotions with curiosity, show compassion, and take values-connected steps. In seeing yourself, you are also able to see others, too.

Yvonne Aki-Sawyerr has experienced her fair share of crises as mayor of Freetown, Sierra Leone: the rebel invasion in 1999 and the outbreak of the Ebola epidemic in 2014 in Sierra Leone made her ask what she should do with the frustration and anger about these situations. She talks about her response in her motivating TED Talk: “How to Turn your Dissatisfaction into Action”.

Aki-Sawyerr was in London in January 1999 and was shocked when she saw the rebel invasion of her hometown on the news. She wanted to help the children affected by the war – and quickly – and wondered what she could do personally. It was at that moment when she realized that she – and every other person – has the ability to turn negative feelings into something positive by allowing dissatisfaction to give birth to change.

So she, her sister, and some friends launched the Sierra Leone War Trust. Working with a local health organization, they started off by helping about 130 single mothers and their children by providing microcredit and business skills. In the sense of female empowerment, some of the women opened their own businesses, repaid their loans, and went on to help other women in the same way. And it didn’t stop there. In 2004, Aki-Sawyerr, her sister, and friends opened an agricultural training center for ex-child soldiers, later followed by a scholarship program for girls who would otherwise have not been able to continue in school.

When Ebola struck Sierra Leone in 2014, Aki-Sawyerr was again in London and another wave of dissatisfaction came over her when she saw the situation escalating in her home country. In November, she flew to Freetown, the epicenter of the epidemic, and developed what became known as the Western Area Surge plan, which led to a rapid reduction in the number of cases. For her, the crisis became an opportunity to contribute something.

How you can turn your dissatisfaction into something good

Yvonne Aki-Sawyerr is now mayor of Freetown and, together with the whole community, is transforming the city to make it greener and cleaner.

Her advice: If something is frustrating you, use that dissatisfaction to change it. If you can improve something, then do it rather than doing nothing.

Sam Berns’s TED Talk from 2013 is incredibly moving and at the same time a wake-up call for anyone who is struggling with a lack of motivation. The young man, who had just turned 17 at the time, explains how he always remains motivated and upbeat regardless and in defiance of his disease called Progeria, which causes those affected to age prematurely. Some may know him from the HBO documentary “Life According to Sam”. Even though he died the year after his inspiring talk, what he said has made a lasting impact. In his TED Talk, “My Philosophy for a Happy Life”, he gives us an insight into what aspects of his positive outlook on life spurred him on every single day.

You might think that someone with such a rare disease – which not only causes hair loss, stunted growth, bone loss, heart disease, and rapid aging, but also premature death – would suffer, but not in Sam’s case. When he was asked in an interview about the most important thing that people should know about him, he answered “I have a very happy life.” Although he had to overcome many obstacles day in and day out due to his illness, he never wanted people to pity him. Instead, he wanted to share his philosophy for a happy life with us.

These four aspects will help you lead a happy life

#1 Be OK with what you ultimately can’t do, because there is so much you CAN do.

What does living with Progeria look like? Berns never thought too much about it, because he was always keeping himself busy. Even though activities like going on a roller coaster were out of the question for him, he chose to focus on what he could do and was passionate about, for example listening to and making music, reading comic books, or cheering on his favorite sports team. For other things, he would look for creative adjustments to make them possible. They would then fall into the “can do” category for him, for example playing the drum in his high school’s marching band. This mindset enabled him to accomplish quite a few of his dreams. What are your “can do” activities and goals?

#2 Surround yourself with people you want to be around.

Family and friends shaped Sam’s life. He believed that happiness is all about spending time with people who make you feel whole and good about yourself, since they have a significant impact on your quality of life. And you shouldn’t forget that you can provide a positive influence in their lives as well. So: appreciate and love your family, friends, mentors, and community.

For Sam, having something to look forward to is key to a happy life – even if it’s just meeting up with friends or the release of a new album. It motivated him to know that there’s a bright future ahead. This mentality includes staying in a forward-thinking state of mind rather than dwelling on things, because when you do, there’s no room for happiness or any other emotion. And if the self-pity does ever take hold, you need to acknowledge it and do what you need to do to move past it.

#4 Never miss a party if you can help it.

Yes, even parties were part of Sam’s philosophy! Such experiences are important to feel connected and enjoy life.

His advice: Instead of wasting energy on self-pity, surround yourself with people you like being with and look forward and not back. Focus on what you can do or what can be achieved by making adjustments. This attitude will pave the way for a happy life, whoever you are and whatever obstacles you face. 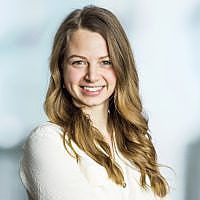 Saskia studied cultural and media sciences in her adopted home of Cologne. Early on, she found her way into the international expo and event sector through a stay abroad. As an event manager, she brings DMEXCO to life in numerous secondary venues outside the expo halls as well. Whether it's a dinner, a lunch or a party - brand experience is her priority.