Is advertising experiencing an identity crisis?

Is digitalization causing a crisis in the advertising industry? Media scholar Markus Feiks has answers.

Why is advertising experiencing an identity crisis?

“Advertising is experiencing an identity crisis for a variety of reasons. As marketing communication grows more individualized and personalized, advertisers must take a very fragmented approach, for instance, in the way they address the different worlds of meaning of their recipients. The advertising industry thus faces the challenge – which in some cases the industry itself chose – of submitting tailor-made offerings of meaning. In other words: both formally and esthetically, advertising is expected to hit the nerve of each and every individual, and to accomplish this in real time.

But another reason for the identity crisis of marketing communication is that it can no longer fulfill its function. Advertising is increasingly being blocked, and for a variety of reasons. So these elaborately produced offers of meaning are no longer reaching their intended recipients, and advertising is losing its legitimacy as a result. Why should someone pay for the production of marketing communication if no one ultimately sees the final product? This is unacceptable, and not just from an economic point of view. People are wasting their useful lives, too.”

What are the problems the advertising industry faces?

“Even if the advertising industry views it differently – and is probably the only one to do so – advertising is neither sexy nor is it the most beautiful communicative incidental in the world. Most people are more annoyed by advertising than impressed by it. This presents marketing communication with a serious problem of acceptance. It would be exciting to analyze whether people would prefer five minutes of silence or to expose themselves to five minutes of advertising. I’m betting on silence. On the other hand, there is certainly advertising that is voluntarily received and shared millions of times in social networks. But these ads are typically not data-driven classifieds but emotional stories that contain a connecting element.

It depends on the communication situation, of course; “advertainment” is not always appropriate. Besides, these promotional stories cost money, too, which brings us to another problem: Performance expectations are growing ever higher, but the resources available to meet these expectations are not keeping pace. Elaborate productions call for resources to match, but there aren’t many who are willing to provide them. The notion that all good communication takes is two or three clicks in Photoshop still seems to be too deeply anchored in the minds of the decision-makers. This is reinforced when technology providers promise that they can produce functioning communication but at a fraction of the cost. In my view, though, creative achievements are difficult to calculate, even if these same technology companies would certainly disagree. And yet competition within the advertising industry has intensified in recent years. New players have arrived on the scene in the advertising market and want a piece of the advertising cake. But the cake has not necessarily grown in size.”

How has digitalization contributed to this?

“Digitalization changes almost everything. For a long time, though, it was not taken seriously enough. This has widened the distance to the companies that already had a leading edge in terms of the knowledge and skills that digital technology and processes involve. So these “digital native businesses” faced next to no competition and were able to develop freely as a result. Many were too slow to react, relying for too long on old business models that were “digital” but did not work as well. We now know that digitalization is changing practically all business processes and will definitely change these over the next few years. Just how deep the cuts will be for the marketing and for that matter the entire communication and media industry can be seen quite clearly in the lamentations of those who are routinely upset with the “market dominance” of Google and the like.

Digitalization also plays a crucial role in terms of automation. With increasing computing power and availability of data, digitalization is advancing even more rapidly. Here, too, it is mainly the technology providers that are accelerating this process. This is understandable, too: after all, their business models are based on it. Ultimately, digitalization has led to a situation in which the advertising industry no longer plays by its own rules and instead plays by the rules of the tech companies. So the loud cries we’re hearing come as no surprise. As I said, though, the communications industry is not entirely free of blame for the situation it now faces. So several factors have converged: the conditions of advertising production have intensified dramatically, and then nobody wants to see the creative products — and certainly there is no one who is prepared to believe the advertising claims themselves. In other words: trusting advertising is essentially like playing the lottery. The likelihood of gaining anything is very, very slight.”

Wasn’t the advertising industry always confronted by a problem of trust?

“I believe that advertising has been trying for too long to draw attention to itself or its reference objects and has used the wrong means to do so. At the beginning of the 20th century, for instance, people were tired of barker-style advertising, and the industry responded by relying on aesthetics. So an attempt was made to establish advertising as “everyday art.” The industry always exaggerated things, though, “biting off more than it could chew,” as it were. Over time, consumers have simply become accustomed to this, and now they know that advertising works this way, that the information is basically invalid, and that you can’t trust advertising claims.”

Why does Generation Y place greater faith in advertising?

“The fact that the so-called “Generation Y” has greater confidence in advertising could simply be explained by the fact that that generation has not been disappointed so often by advertising yet. Or perhaps that generation has a different reception behavior, one that views advertising as a communication offer among many without downgrading or rejecting advertising outright. In a worst case, this generation might simply not care where they get their information. I think it has something to do with the communication experience everyone has. If this experience is positive, then I’m going to be willing to listen in the future, too.”

Is there a way out of the identity crisis?

“If you view the identity crisis as a crisis of function, then definitely. Advertising has to be able to get people to listen and believe what it’s saying. At the moment, advertisers are trying to overcome this crisis particularly through native advertising or branded content. The idea is for promotional communication not to be perceived as such. I believe that this is the wrong way, though; it’s objectionable and by no means the solution.”

Read the second part of the interview to find out why native advertising is the wrong way out of the crisis, and what a meaningful future for advertising might look like. 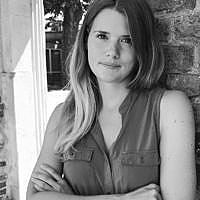 Katharina Nottmeier is a volunteer at the communication consultancy pr://ip - Primus Inter Pares based in Münster. She holds a B.A. in communication science and is a media clerk for digital and print media. During her studies she gained several years of experience in publishing and journalism.