What smart displays mean for marketers

Amazon Echo Show, Google Home Hub and Facebook Portal are creating a new class of device. We present it here.

Are language assistants such as Alexa perhaps getting their screens back? That would certainly be good news for anyone who wants to reach people here. Amazon is a pioneer in this regard with the “Echo Show.” Google and Facebook are now catching up. This new device category is known as “smart displays:” They expand a smart speaker by adding a screen. What may sound simple actually makes a considerable difference.

One of the ideas behind it: language is often a good medium in which to ask a question. But it is not always the best medium to use for the answer. Sometimes, a video works better, or maybe a text, a graphic or a photo. Just think of the weather forecast for the next five days: a smattering of symbols and figures can be grasped more quickly than if a computer voice reads through all the details for each day.

Besides, entertainment and video communication play an increasing role, and naturally, they are well suited for the task. Last but not least, these devices often make themselves useful as a control center for the smart home.

What the devices by Amazon, Google and Facebook can do

Amazon’s Echo Show made its debut during the past year and has just now been presented in a heavily revised, second version. The 10.1-inch display in particular is significantly larger than its 7-inch predecessor. It can be controlled by both voice command and touchscreen. The “Skills” function can be used to add new features. There are no apps in the classic sense of the term, however; everything is deliberately kept plain and simple. Amazon’s own video offering can be used, and for other video sources such as YouTube or Netflix, users to date have had to rely on the built-in browser. Video calls are possible, although the other side also needs an Echo Show or the Alexa app. Price for the Echo Show: USD 229.

Google, on the other hand, showed its operating system for smart displays at the beginning of the year, which hardware manufacturers can use. Among others, Lenovo, for example, presented its first device for this purpose. Now Google followed suit with the “Home Hub” itself, which is comparatively inexpensive at 149 US dollars. Interestingly, it uses a different system, as Ars Technica found out. The Home Hub comes without a video camera. On the other hand, YouTube is, unsurprisingly, firmly integrated by default. Ultimately, the interface is reminiscent of the Google Assistant app on smartphones and the functionality is also very similar.

Facebook, on the other hand, has just presented two devices, known as “Portal” and “Portal+”, that are intended chiefly for video chats via Messenger. The smaller model has a screen measuring 10 inches, and the “plus version” is offered with a rather massive 15.6 inches. These cost USD 199 and USD 349, respectively. The language assistant currently supplied on board is Amazon’s Alexa. In-house, however, Facebook is apparently working on its own competitor to Alexa.

What do marketers derive from this for themselves?

These devices ultimately have a great deal in common with tablets. One factor that, above all, speaks for smart displays as a device class of their own is the fact that they are simpler and do not overwhelm users with lots of tiny icons and countless options. With several microphones and larger speakers, they are also more effective as a voice assistant.

A trend towards smart displays would certainly be good news for marketers. Because this is already an area in which marketers can already score with already-familiar means such as search-engine optimization and a content strategy that includes useful videos and articles. After all, with these devices, questions are no longer answered in just one or two sentences. Anyone interested in an explanation for a recipe or repair will be pleased with a visual guide. In addition, as with digital assistants in general, what is also important here is to appear in relevant directories such as Yelp, to structure one’s data in a computer-readable manner, and to have the possible questions of the target group in mind when designing one’s own content. More about this in my article on the topic.

Another possibility to emerge here are extensions for the language assistants. Amazon calls them “skills,” and at Google they are known as “actions.” You can think of them as apps that the user actively calls up. An example of this is Bring, the Swiss app for shopping lists.

Last but not least, these smart screens could ensure that other groups will use the language assistants, too. Some people might acquire an Echo Show mainly as a small online TV, only to discover additional features later on.

And no matter whether smart displays ultimately prevail as a device category or not: They show that we will not soon be living in a screenless world in which all we do is converse with computers. Instead, there will continue to be different, parallel ways to interact with computers – depending on what works best for the task at hand. 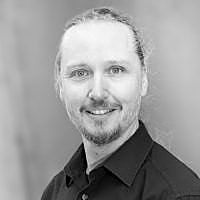 Has been working as a journalist for over 20 years, most of it digitally. Founder and co-editor of UPLOAD magazine. He is fascinated by the freedom of digital publishing and likes to explain how companies, organisations or even self-employed people are heard with their messages on the Internet. Always with one foot firmly in the future. The Hamburg native now lives in Santa Fe, New Mexico.
Share this story