Three learnings from the success story of Opinary

Those who currently spend time on major media websites often encounter tiny opinion surveys to which readers can use a slider to respond. Opinary is behind these. Today, surveys by this Berlin-based startup, winner of the Start-up Hatch at DMEXCO in 2017, can be found not just on the sites of Germany’s 15 largest news providers but also on the leading entertainment platforms of the US and the UK.

Thanks to Opinary, readers of online content can click to share their opinions with a broad audience on a particular topic. The sense of the overall mood is then analyzed and graphically edited using tools provided by Opinary. The interaction rates on the news sites increase, and visualization makes the exchange of views and participation on certain issues and debates accessible to the general public.

The idea is simple and convinced not only the Hatch jury at DMEXCO 2017: “Since our success at DMEXCO, we opened offices in London and New York last year and have attracted lots of leading English-language publishers, including NBC, Huffington Post and Forbes,” says Pia Frey, co-founder and Head of Publishers. It all started in 2013 with Pia and the Grimme Prize-winning “Pressekompass.”. Her brother Cornelius and co-founder Max Meran quickly recognized the potential of measuring and presenting public opinion to publishers and advertisers. And so the three founded Opinary together.

As part of the internationalization, the tool will now be established step by step in the US and the UK.

Opinary is at DMEXCO again this year (Hall 8.1) to reach lots of relevant people and brands: “We now use DMEXCO not only as an opportunity to present ourselves to new media companies and advertising partners but also to meet potential new employees,” explains Max Meran, Head of Brand and Agency Partnerships.

Read our whitepaper, "Three Learnings that Make Your Startup More Successful” to learn what it takes to succeed as a start-up. The paper is based on the success story of Opinary and works out some of the key findings of importance to you. 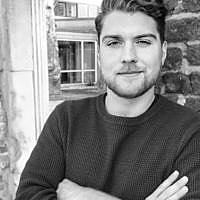 Linus Kurtenbach is a junior consultant at pr://ip - Primus Inter Pares and Digital Native. The master student in the field of communication management likes to write about topics from the digital economy, marketing and innovation.